Trade restrictions on the locals led to revolt which ended in a Declaration of Independence in July 9th, 1816.
As Argentina developed and grew, also grew a rift between the capital and the provinces. From the capital came to known as the Unitarists while those from outside the capital were known as Federalists. Civil war followed a bloody, messy, and exhausting period of Argentina's history.

MORE ABOUT THE INDEPENDENCE 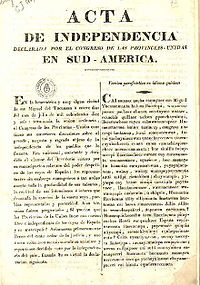